With a presence in Thailand since 2004, we have developed a track record of safe, reliable and efficient operations covering exploration, appraisal, development and production activities.

Mubadala Energy operates three concessions within the offshore Gulf of Thailand, and is the second largest crude oil producer in the country. We also have a 30-percent non-operated interest in the G6/48 concession. All three producing oil fields, along with our Bangkok office have received accreditation to the international safety and environmental standards, namely ISO 14001 and OHSAS18001, the quality management standard ISO 9001, and the occupational health and safety management standard ISO 45001.

We also have a well-established community investment program partnering with key local stakeholders to support the coastal communities in the vicinity of our operations. Our contribution to the local economy since commencing operations has been significant, totaling over USD 5 billion so far, with contributions in revenues, jobs and economic activities.

Mubadala Energy has a 100-percent participating interest in the Jasmine oil field development in Block B5/27. The first Jasmine platform was installed in March 2005, with first oil achieved in June 2005. The Ban Yen field started production in 2008. Today, the facilities consist of six platforms and one Floating Production, Storage and Offloading unit. The cumulative production stands at over 85 million barrels; a substantial increase from the estimate made at the time of purchase in 2004.

In November 2014, the Manora oil field, located in the Northern Gulf of Thailand in the G1/48 concession, started production. Mubadala Energy is the operator and holds a 70-percent participating interest. The field was discovered in 2009 and safely taken from appraisal, through to development and into production. The facilities include a Wellhead Processing Platform and a Floating Storage and Offloading vessel. The cumulative production has exceeded 20 million barrels to date.

In June 2015, the Nong Yao oil field in Block G11/48, in the southern Gulf of Thailand, started production. Mubadala Energy is the operator and holds a 90-percent participating interest. The facilities comprise a Wellhead Platform, a Wellhead Processing Platform, and Floating Storage Offloading vessel. Cumulative production from the field to date is in excess of 20 million barrels.

Nong Yao was the second development in Thailand after Manora that Mubadala Energy has taken from discovery and appraisal through to development and into production. The field was originally discovered in 2009 and further appraised by five wells. The project was delivered efficiently, on time and most importantly safely.

In April 2022, Mubadala Energy will commence a partner role with a 40-percent participating interest in the G1/61 Erawan gas project, where PTTEP Energy Development Company Limited will be the operator. 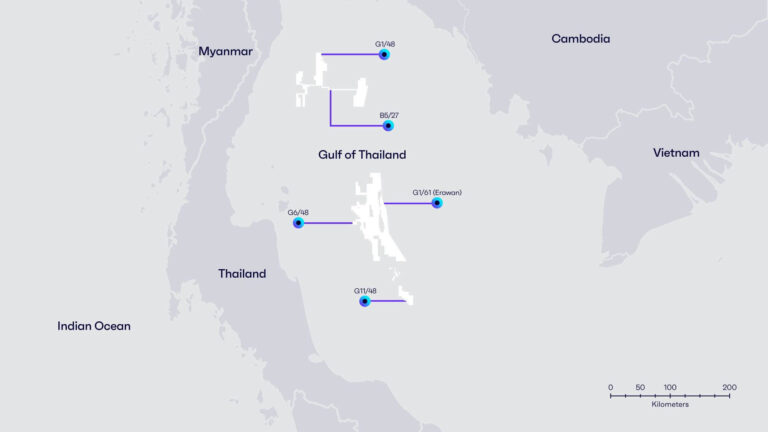