We have been present in Indonesia since 2004 and operate four offshore Production Sharing Contracts (PSCs): In the Makassar Strait the Sebuku PSC with the producing Ruby gas field and the West Sebuku PSC plus offshore Aceh the Andaman I and South Andaman PSCs. We also have a non-operated interest in the Andaman II PSC.

Our Indonesia operation has maintained an excellent safety record with no Lost time Incident (LTI) during development and in production. The Ruby operations have accreditation to the international management, safety and environmental standards, ISO 9001, 14001 and OHSAS 18001.

We have a well-established community investment program partnering with local stakeholders to support the coastal communities in the vicinity of our Ruby operations.

The Ruby gas field supplies reliably and safely gas for the domestic market since October 2013. Located in the Makassar Strait (between the islands of Kalimantan and Sulawesi), Mubadala Energy as operator has a 70 percent interest in the Sebuku PSC with partners Total E&P Sebuku and INPEX South Makassar Ltd each holding a 15 percent interest.

The facilities include a wellhead platform, a production and living quarter’s platform with the gas being transported via a 312-kilometer underwater pipeline to the onshore receiving facilities at Senipah. The gas then delivered to a fertilizer plant owned by the buyer, PT Pupuk Kalimantan Timur. Ruby has achieved over 250 billion cubic feet cumulative gas production to date.

The Ruby project was delivered safely, on time and within budget in 2013, 28 months after sanctioning with an investment of over US$500 million

Mubadala Energy is operator of the West Sebuku exploration block which surrounds the Sebuku PSC, and holds a 75.5 percent interest with INPEX Corporation holding 24.5 percent interest. 3D seismic data was acquired over both blocks in 2014.

We are also the operator of the Andaman I and South Andaman exploration blocks offshore Aceh and have a 30 percent interest in the adjacent Andaman II PSC. 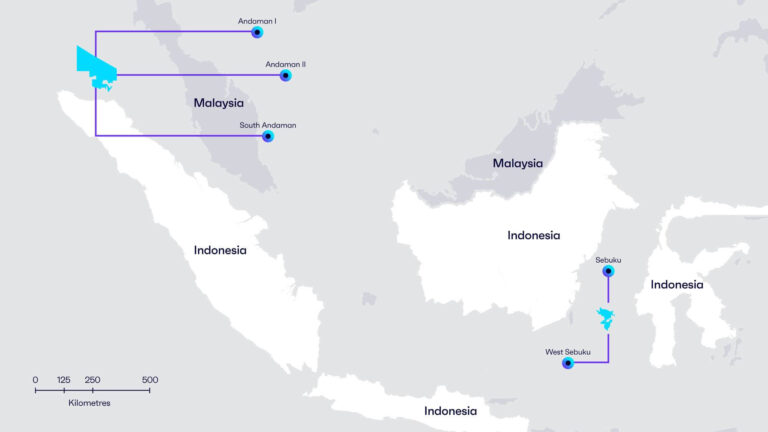